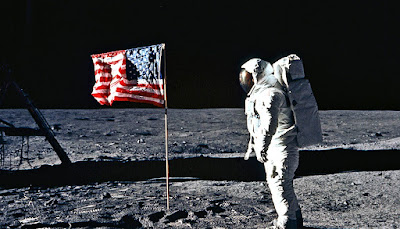 Have you ever heard of the term "plant your flag" as it refers to business? This was a new one for me. Just a few weeks ago I was on a training call when someone used the phrase and I learned what it means. Keep reading to find out more.

The image I used above is a famous example of planting a flag - when Apollo 11 landed on the moon and the American astronauts planted the American flag on the surface of the moon. It was a symbolic way of laying claim to that area or just saying "we were here." Either way, it was a statement that would stand the test of time. It was a statement of commitment to future space exploration. And although we were only able to go to the moon six times, the space program has continued to explore, even today, as we seek a new program to go back to the moon and beyond.

So what in the heck does that have to do with business and network marketing in particular? Everything, really. Think of it in terms of commitment. Commitment to your goals and dreams, but even more so committed to building a business with a company. Why the commitment to a company, you ask? Are they really committed to you? Let's break this down.

Let me share something with you that I was told on the job a long time ago. My boss said, "You can be good at 10 things or you can be the best at one thing." He was right. If you try to build multiple businesses at the same time, you can be okay at it, but you won't excel. It's hard enough just building one business. But when you focus on a single opportunity, you can become excellent at that one thing - maybe even the best in your industry. Who knows?

But what if the company isn't committed to its representatives, you ask? Then it's probably not the right company to get involved with. If the company changes their comp plan like underwear, then it's probably not so good. Take a look at the comp plan. How much is the company giving back to its representatives? Is the majority of the proceeds from sales going to the company or the distributor? Find the company that feeds the distributor more than it feeds itself. When you find the right one, you'll know. Distributors will be able to make money without sponsoring anyone, and if they do build a network the compensation plan will reward them handsomely.

That being said, I want to offer you the opportunity to take a look at the Nexus Rewards compensation plan and business overview. I can promise you've never seen anything like it. And they give an unprecedented amount of their revenue back to the distributors building sales networks. It's unbelievable (in a good way)! Take a look and let me know what you think in the comments below.

(Note: This is a flipbook link. The flipbook has an audio overview available on the pages.)